Defra will fund two companies in the next phase of its digital waste tracking project over the next 12 months.

Announced at RWW’s Smart Waste, Smart Resources conference last week, the next phase of the project will award up to £500,000 to build and test the UK’s first comprehensive digital waste tracking solution.

Global sustainability consultancy Anthesis and data analytics business Topolytics beat off competition from three other companies in phase one of the trial.

The companies now have a year to produce a private beta tested version of their system.

Speaking at the conference, Alistair Paul, Defra joint team leader, waste regulation and crime, said: “A lack of digital waste data waste keeping is frequently exploited by organised criminals and better data can help us in a number of different ways.

“Some of us have sophisticated systems and some information is shared but it’s often not discoverable or very poor quality. We are therefore looking for a waste tracking service capable of ingesting data, providing different levels of access, data reporting and data storage and potentially also some level of public of open access.”

Each waste transfer note would be captured and treated as a transaction between three parties- the waste producer, waste carrier, and waste management site receiving it.

Waste movements would be given a digital transaction ID, which would scan QR codes on mobile devices to record the ID, making transactions faster, less open to errors and

Anthesis hopes that Vastum will eventually be able to track waste in close to real time.

Simone Aplin, technical director at Anthesis, said: “We are thrilled to further develop and test Vastum.We believe it will deliver economic and environmental benefits that are truly transformational.

“A successful system will significantly reduce the administrative burden for the sector and generate the data needed to tackle waste crime, inform policy and guide vital investment in the circular economy.”

Topolytics’s system will monitor and analyse all waste transactions across the UK to develop better patterns of waste movements in a bid to drive improvements in the waste system.

It will analyse data from many sources including invoicing records, weighbridge and bin weighing systems, vehicle telematics, ‘internet of bins' sensors and smart labelling systems.

Michael Groves, Topolytics founder and CEO, said: "This is a truly ground-breaking project and one that we are proud to be working on. It will transform waste regulation and the industry in the UK and has significant international potential."

The money comes from the Government’s £20m GovTech Catalyst fund which supports the development of innovative solutions.

Illegal waste activity drains the UK economy of around £600 million every year.

The commitment to clamp down on illegal movements of waste at home and abroad, including compulsory tracking of waste, is included in the Environment Bill.

Back to Advanced Technology
Next

Why digitalisation lies at the heart of smart resource management 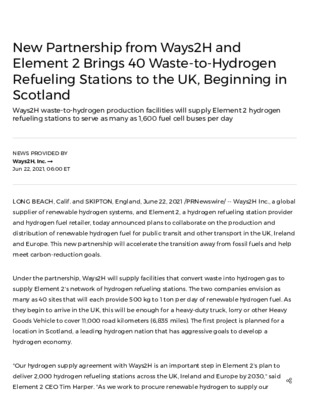