The world seems to be changing at lightning speed.

With AI growing ever more sophisticated, cashless transactions and data harvesting, tech is helping us live lives unimaginable just 20 years ago. It was fitting therefore that the tagline for this year’s EfW Conference was ‘Waste to fuel the future’, given the two-day event celebrated the very brightest advancements in the sector.

Chris Preston, deputy director for waste and recycling at Defra, came down from his self-labelled ‘Westminster Ivory Tower’ to deliver a keynote speech on the Resources and Waste Strategy, providing a behind-the-scenes look at Defra’s next moves.

He called on conference delegates to actively engage with Defra’s consultations, arguing “better policy is made if people contribute”. As for the state of EfW infrastructure, Preston was refreshingly complimentary.

He said: “Energy from Waste gets a bad reputation, but it is a crucial part of the waste hierarchy. It is diverting waste from landfill, and despite the counter-argument, we have seen small increases in recycling and we want to increase that. We are also looking at more heat and power and how to connect the two.”

Despite Preston’s praise for the technology, he was met with criticism that the strategy had overlooked EfW. Jacob Hayler, ESA executive director, said: “If I were to summarise my initial reaction to the strategy, I felt frustrated.

It was a positive message in there where finally a government document recognised we’re going to be short of EfW capacity to deal with non-recyclable waste. But it was buried deep in a technical annex and hard to find.”

Hayler echoed the sentiments of many in the room by laying out the missed opportunity of the strategy to create a positive picture of jobs, investment and the wider benefits of EfW. He also used his platform to call for more EfW infrastructure – a necessary investment if the UK is to deal with its growing waste capacity gap and decarbonise its energy market.

In order for the sector to progress, like its many stakeholders would like to see, community engagement is paramount. Delegates were met with a different perspective of the EfW process from Penny Pearson, who is a community panel member from Great Blakenham, Suffolk.

When Pearson initially heard of the plans to build an EfW plant in her village, she protested due to concerns over traffic coming through the village and archaic impressions of the plants of the 1970s with plumes of smoke pouring out of the chimney.

She said: “Within a few days of voicing our concerns, we were sent letters inviting us to form a liaison group. We were still not convinced and thought if the government lied to you, why shouldn’t another bloke lie to you? But the company fell over themselves to please us, and hired a coach to take the community up to another site in Yorkshire.

“We changed our minds after we’d seen the other working plans and the company kept changing the plans to suit what we wanted. We went from campaigner to convert.”

Pearson’s story was echoed by another panellist, Jane Ford, who lives close to the Devonport EfW plant in Plymouth. After finding out more about the proposed site, Ford swapped her protest board to become a community officer.

With the right message and an intention to educate residents early on, panellists depicted a picture of future EfW development sites which may no longer have to come up against angry residents who have very genuine, if not somewhat misguided, concerns.

The sector has a positive message to tell to residents, and is so far not taking advantage of this, said Paul Davison, founder of Proteus PR. “You’re not going to change people’s minds by sticking up a few pictures – that is not consultation. We need to share best practice and explain to each other what does on – what are we frightened of in this industry?

“If we are not sharing best practice, we will be judged by the worst performers and other stories of bad engagement. Communities do not like change, especially when they introduce an idea they don’t know anything about and rely on older ideas of EfW plants.”

Our vested interest is so large, the public won't listen."


Davison pulled no punches when criticising the industry’s current communications strategy. He said: “Our vested interest is so large, the public won’t listen. We need a culture change not when it’s in our vested interest for commercial success, but much earlier on in the discussions in order to get the public on board.”

The EfW market has come a long way, but when developing new technologies and creating new ways to deal with the UK’s waste, it is inevitable that there will also be errors along the road. It may not be easy for a company to acknowledge these, but real progress can only be made when companies share what’s gone very wrong as well as what’s gone very right.

Delegates were therefore all ears to hear about the remarkable work done at Levenseat’s site in Scotland, given it is currently perfecting a gasification process. The combined heat and power plant and MRF has been met with plenty of challenges given the technology is still relatively new, which meant finding financial backers was more difficult.

Angus Hamilton, MD of Levenseat, said: “We can build a plant and design it for a waste stream but we don’t know what the composition will be in 20 years. Also, by being a merchant facility, we cannot rely on municipality waste stream. One of our learning points would be to think about the shape of the facility before going ahead with planning.

“During development we took an open view in terms of technology in process. We hadn’t pre-selected a technology for gasification and we therefore left it for the market through the tendering stages.”

Now Levenseat is planning for a second plant which includes the potential expansion of the MRF. It also has a thermal capacity of 70MW and a grid connection in place for that. Hamilton said: “Looking at where the market stands now, a lot of the renewable subsidies have fallen away but we are now looking at building a facility that has to stand on its own two feet in terms of gate fees.”

So the challenges are there, but so too are the opportunities. Moving forward, the EfW market has lots of potential for much more than just energy.

Vice-president for waste fuels at Velocys Technologies Neville Hargreaves brought delegates up to date on its project, run in partnership with British Airways and Shell, to turn waste into jet fuel. After securing £4.9m in funding last year, the project is well under way to build the UK’s first waste-to-fuel plant.

He said: “It’s a very challenging project to finance as it’s a new market so financing against credit isn’t easy. But we have now secured a site at Immingham and it’s in line with the Department for Transport’s priorities.” Given that just 2% of transport fuels are currently renewable, it will be the first site of many as the UK looks to decarbonise its transport and create more circular systems.

The overarching sense from the 15th Energy from Waste Conference was one of an industry riding the highs of a renewed interest in environmental causes and consequential windfalls of investment.

Though there are challenges, these were confronted rather than overlooked, and can now be dealt with in order to create a versatile sector which continues to progress and create real alternatives to old waste problems.

As the waves of change continue to wash over the sector, the Energy from Waste Conference is well-placed to bring together a vast array of industry experts all under one roof. 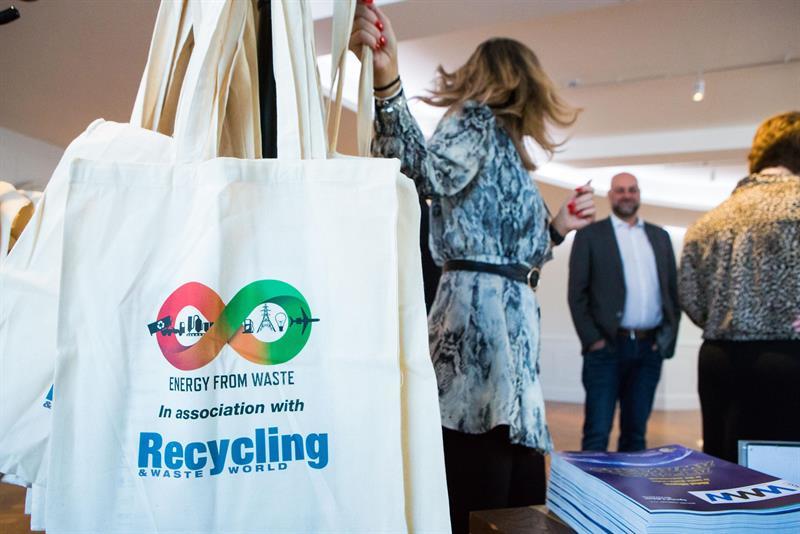