On Wednesday 10 November 2021, the application for the South Humber Bank Energy Centre was granted development consent by the Secretary of State for Business, Energy and Industrial Strategy.

EP Waste Management Ltd (EPWM), a subsidiary of EP UK Investments Ltd (EPUKI), received development consent for the construction, operation and maintenance of an energy from waste (‘EfW’) power station with a gross electrical output of up to 95 megawatts (MW), including an electrical connection, a new site access, and other associated development on land at South Humber Bank Power Station (SHBPS), South Marsh Road, near Stallingborough in North East Lincolnshire. The EfW power station will be known as South Humber Bank Energy Centre (SHBEC).

The Order grants development consent for this Nationally Significant Infrastructure Project comprising the construction and operation of an energy from waste plant of up to 95 megawatts gross capacity and associated development including an electrical connection, landscaping and access. The application was submitted to the Planning Inspectorate for consideration by EP Waste Management Ltd on 09 April 2020 and accepted for examination on 04 May 2020. Following an examination during which the public, Statutory Consultees and Interested Parties were given the opportunity to give evidence to the Examining Authority, recommendations were made to the Secretary of State on 10 August 2021. 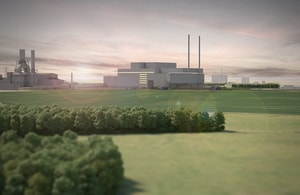 The South Humber Bank Energy Centre will provide approximately 55 permanent jobs, create around 600 jobs during construction and be capable of operating for at least 30 years. It represents a significant investment by EPWM in North East Lincolnshire (approximately £300 million) and follows a recent major investment by EPUKI in the existing CCGT power station to extend its operational life.