SUEZ recycling and recovery UK is celebrating a gold award in the Ministry of Defence’s Employer Recognition Scheme, just a year after receiving the silver award.
Energy from Waste
Editorial staff, Energy from Waste
Follow
Like Be the first to like this
0

The scheme recognises employers who actively support reservists, veterans, cadet force volunteers, spouses/partners and the wider armed forces community. To be considered for a gold award, organisations must provide additional leave for reservists and have in place supportive HR policies for employees who are veterans, reservists and cadet force adult volunteers, as well as spouses and partners of those serving in the armed forces. They must also support causes related to the Armed Forces and be an advocate for supporting the community.

Dr Tracey Leghorn, SUEZ’s Chief Business Sevices Officer, collected the award on behalf of the company at a ceremony in Portsmouth on 06 October 2022. This followed a celebration in September at the National Memorial Arboretum, where 40 members of SUEZ’s active veterans’ network were joined by the company’s senior leaders to hear from representatives from The Royal British Legion's Battle Back Centre, and Help for Heroes. The day long event also gave those attending an opportunity to connect with fellow veterans from SUEZ sites around the country and time to pay their respects at the memorials displayed around the Arboretum.

Dr Tracey Leghorn, Chief Business Services Officer for SUEZ recycling and recovery UK said: “I am proud that SUEZ’s support for the armed forces community has been recognised with the Ministry of Defence’s gold award. As the Joint-Chair of our SUEZ Veterans Network, it was a privilege to attend the ceremony on behalf of the company and our veterans to collect the award.”

John Scanlon, Chief Executive Officer for SUEZ recycling and recovery UK said: “Our veterans and reservists at SUEZ offer a wealth of transferable skills, including many skills in high demand in the UK’s growing green economy. We recognise and value their expertise, and are committed to supporting our armed forces community to develop fulfilling career paths with the company.”

Dave Shaw, Veteran of the Royal Electrical and Mechanical Engineers and Fleet Manager for SUEZ recycling and recovery UK, said: “An incredible amount of hard work has gone into developing SUEZ’s veterans’ network since it began four years ago. The level of support that SUEZ gives to the armed forces community is invaluable and this continues to be improved with input from veterans.”

SUEZ recycling and recovery UK employs over 5,600 people, operating across hundreds of sites, and handles in excess of 10 million tonnes of waste materials every year – a significant proportion of the UK’s total waste. Through collection, treatment, recycling and logistics operations, it serves more than 30,000 business customers and millions of householders throughout the country. Please visit https://www.suez.co.uk to find out more. 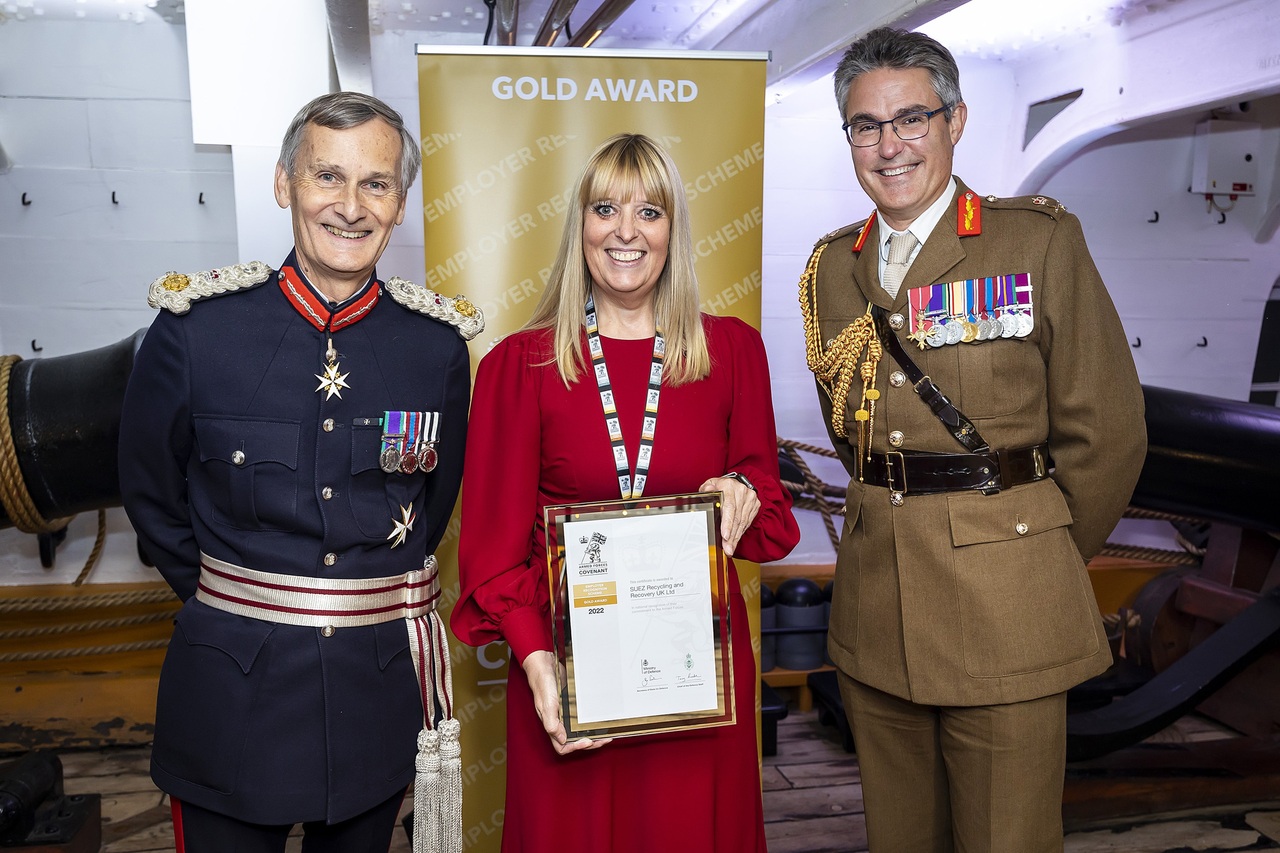 SUEZ recycling and recovery UK is celebrating a gold award in the Ministry of Defence’s Employer Recognition Scheme, just a year after receiving the silver award.